No doubt you’ve heard that TBS's Conan has been planning their grand return to New York City. Starting today and throughout the first week of November Conan will be filming their episodes from Beacon Theater near downtown. Most of the crazy antics are being kept secret, but we were privileged to be involved in one very special event to help highlight Conan’s return to The Big Apple – and it didn’t even require airfare. 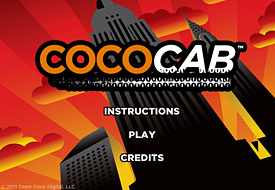 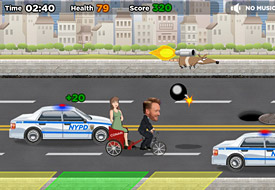 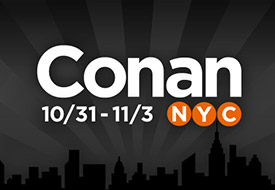 Earlier in the month Team Coco reached out to us to brainstorm an over-the-top game experience that would be suitable for just such an occasion. After an intensely-brief couple of weeks, the CocoCab game was born. CocoCab puts every Conan fan in control of the late-night legend himself as he peddles feverishly to reach the New York premiere before opening curtain. After all, Conan without Conan, well, isn’t Conan.

But there’s still civic duty to be done, so along the way you’ll be able to pick up passengers and have them tag along for the crazy ride. Dropping these kind folks off at their requested destinations will earn big points, but you’ll need to watch out for rampaging NYPD squad cars, taxis, and even jet-propelled bomb-dropping rats if you want to make it there safely.

The more passengers you deliver happily the better odds that you’ll cross paths with your good friend Andy Richter who is simultaneously racing to the premiere in his Team Coco-branded Chevy Sonic. Andy knows how to keep Conan rolling, so watch for him and the very special power-up he can bestow to increase your odds of winning.

Also in the mix is the illusive “Teddy Jr.”, who will stop at nothing to demean Conan and his entire program. This is your chance to even the score, so if you come across this buffalo-riding renegade run him down for some big bonus points.

We’d like to extend our thanks to everyone at Team Coco that helped bring CocoCab to Conan fans nationwide.

After producing CocoCab, the real world doesn’t seem quite insane enough, but we’ll look forward to the week of entertainment Conan is packing from NYC and call it a wash.

Learn more about our Game Development Services or, better yet, let us know what we can create for your business.